The CEO of Milk SA, Nico Fouché, and members of the Consumer Education project team, explained the very interesting nature of the Milk SA project to department officials and involved their schoolgoing children in a playful way.

Each school represented at the event received a school kit, initiated by Milk SA's consumer education project. The kit focuses on education regarding healthy eating habits and nutrition for learners in grades 4 to 7.

Teachers of the children involved also received lesson plans, work sheets and assessment tools for nutrition education. The material is in line with the SA Food Based Dietary Guidelines.

Both children and adults also enjoyed a variety of dairy products which were colourfully displayed at the event.

The department made a wall available on which an artist painted beautiful images. The children were then allowed to add their "creations" which depicted animals, flowers and loads of interesting pictures! ME 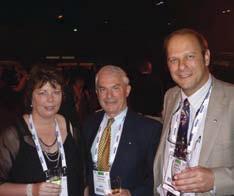 In November 2010, Nico Fouché, CEO of Milk SA, together with other members of the dairy industry, attended the International Dairy Federation (IDF) World Dairy Summit in Auckland, New Zealand. With a record attendance of more than two thousand delegates from 66 countries, the summit was a resounding success.

Apart from the valuable information conveyed during the various standing committees and conferences, the event once again proved to be a good opportunity to meet with world dairy experts and decision-makers, to benefit from new insights and to build and strengthen international knowledge transfer and partnerships.

Topics addressed during the conferences included dairy farming, dairy policies and economics, dairy science and technology, cheese science, the environment, marketing, and nutrition and health. These conferences were led by knowledgeable speakers and moderated for maximum participation from the floor.

At the summit, which focused on sustainability, updates on the latest research covering climate change, carbon footprinting, water footprinting and reuse/recycling, were shared and discussed. Two key factors are the need for better approaches to water management and the reduction of greenhouse gas emissions. Fouché said that the initiatives by the South African government and the local dairy industry are encouraging and in line with initiatives of leading countries around the world.

The challenge, he said, was to harmonise these initiatives and to encourage the implementation of feasible, economically viable technologies and practices. In general, he said, the South African delegation to the summit noted that the South African dairy industry was still extremely competitive in terms of the important variables that drive the industry.

A full report will be published by the South African National Committee of the IDF early in 2011. Italy will host the World Dairy Summit next year and in 2012 it will be held in Cape Town. ME 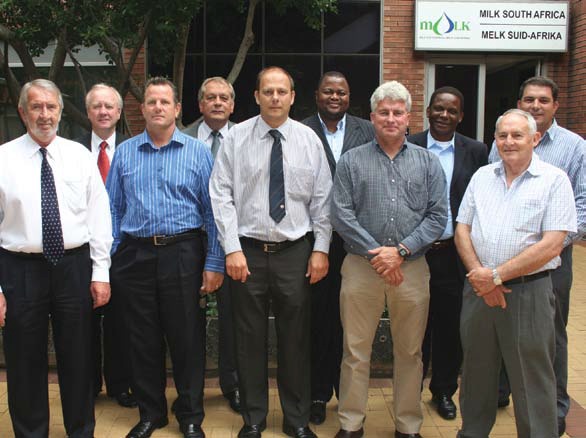 At their last meeting for the year held on 1 December 2010, the Milk SA Board of Directors approved the following project proposals:

Formal structures such as advisory committees and work groups, are in place to advise the board on the merits of the project proposals, its performance, remedies, etc. The National Agricultural Marketing Council (NAMC) also attends board meetings, as the Minister of Agriculture appointed Milk SA as the administrator of the regulations. The board took note of positive outcomes of the projects for 2010 as well as a healthy administrative and financial position. A detailed report in respect of the projects managed in 2010, will be available early in 2011.

Any enquiries regarding the projects and structures mentioned in this article, should be directed to the CEO of Milk SA, Nico Fouché, at 012 460 7312.

It was previously reported by Milk SA that a list of research work has been published on its website www.milksa. co.za. (See "Milk SA Research Data Base" under "Links"). We have now also started to publish short articles from that list. Milk SA's pivotal role is to enhance the competitiveness of the dairy industry of South Africa and therefore, the practical knowledge that is now opened up to industry participants makes perfect sense. Articles (prepared for Milk SA by Dr Meissner) will soon start to appear on our website. ME

Joubert Fourie, well-known dairy farmer of Louis Trichardt, has just been appointed as member of the Milk SA Board. He has been nominated by the Milk Producers' Organisation to serve on the board.

Joubert is a member of a family-run business focussing primarily on dairy. They also run a sheep, Boer goat and Kalahari Red herd, and are the country’s largest goat’s milk producers.

Their brand, Limpopo Dairy, is well-known in the northern parts of the country. They are one of very few large dairy producers in the country who are actively involved in the entire value chain of their product.

Joubert has been the winner of the Master Dairyman competition in the Northern region, and has also been crowned as the Agricultural Writers Association’s Farmer of the Year for Limpopo.

Milk SA is honoured to have Joubert on board. ME

The milestones achieved in terms of Milk SA's mandate to co-ordinate fragmented research, were highlighted and Dr Moephuli welcomed the proactive approach of the organised dairy industry.

It was agreed that the ARC and Milk SA will commence with practical meetings as soon as possible. Annual R&D Forum meetings will be co-hosted by Milk SA and the ARC. The next forum meeting is scheduled for 24 March 2011. The parties also agreed that the Milk Recording Scheme was an important cornerstone for research and development, as it promotes more effective farming and in general, a more competitive dairy industry. ME

The star of the show

Our new dairy advertisements feature characters from South Africa's early history, namely a Khoi cow salesman and his two customers, a Zulu warrior and a Dutch settler. In the ads, the cow salesman, acting much like a modern-day car salesman, tries to sell a cow to his initially skeptical customers with a convincing sales pitch.

The new television advertisements position milk as a preferred choice of beverage and is an initiative by the Consumer Education Project of Milk SA. The Khoi cow dealer convinces the buyers (Zulu of Dutch settler) that he is not just buying a cow, but a life-long supply of milk. Once he explains the benefits of drinking milk and gives them a little sample, his customers are instantly convinced they're getting a great deal.

The nutritional message is to inform viewers that milk is nutritious and healthy. Three servings of milk or dairy a day make a meaningful contribution to the diet by providing good quality protein, a variety of essential vitamins as well as calcium and other minerals needed daily to achieve good health and help prevent disease.

The television advertisements can be viewed on www.dairy.co.za. ME

During the last decade of the previous millennium, efforts were made by the now defunct Training Board for the dairy industry to develop standards and curricula by which the training of "new" dairymen could take place. Learning had to be converted to unit standards and outcomes based models. This system of learning has never been utilised to its full potential, partly due to its fragmented approach and top-down bureaucracy.

Now, the approach to trade and occupational learning has been given a new lease on life with a philosophy that is very much aligned to that followed by the Training Board in the 1990s.

A working document has been compiled for the secondary dairy industry and contains a design for a "dairyman" curriculum encompassing ten fields of specialisation. This draft curriculum will be piloted in 2011 and 2012 to determine its utility, prior to final submission to the authorities for registration.

What's up at the DSA?

The most important elements which have thus far determined the development of the DSA, are the maintenance and expansion of the DSA’s integrity as organisation; recognition of the multi-dimensional nature of the task performed; and the creation of a functional working relationship with the various institutions legally responsible for applying the standards.

In its planning for 2011 (approved and financed by Milk SA), the DSA deems it necessary to continue with the approach described above. Various other priorities have been identified in line with the DSA’s mandate, of which the limitation of sub-standard products in the retail is the most important. Certain secondlevel priority areas will also enjoy attention, e.g. accreditation of the DSA as audit certification body in the food safety and quality disciplines of the dairy industry. The DSA will continue to promote its work and goals through articles in selected publications, national radio interviews and other communication vehicles. ME

Milk SA has embarked on a new innovative project aimed at uniting current expertise in different aspects of dairy production and products to utilise available data, collected through the National Milk Recording and Improvement Scheme, to develop innovative products that will enhance the efficiency of the industry.

The reports to be developed will depict:

The research project will be under the supervision and control of Milk SA programme coordinator, MBISI, while the project team will consist of members from various entities in research and development, livestock recording and the dairy industry. The project will also rely on inputs from members of Milk SA and other industry role players.

The outcome from the project will be regular reports for the:

The success of using the products of this project will be measured in terms of the cost-efficiency of the dairy industry. The main aim is therefore to assist all role players to increase the competitiveness of the whole industry. ME

In order to achieve its goals, Milk SA has, among others, already taken the following steps:

Transformation workshops to discuss the draft transformation strategy, have so far been presented in the Eastern Cape, Free State, Limpopo, Mpumalanga and Western Cape. The participants agreed to establish inclusive local dairy development committees. It is also encouraging to note that commercial farmers in the Eastern Cape embarked on this initiative some time ago by establishing the Fort Hare Dairy Trust.

Transformation should be approached from a business perspective. The role of Milk SA as facilitator is to ensure that all relevant stakeholders such as the MPO, Sampro, government institutions, milk buyers, etc. are involved in projects such as the development of emerging dairy enterprises. Milk SA will do everything possible to ensure the viability of the projects through proper coordination and management.

Many commercial milk buyers and farmers are committed to mentor small-scale farmers. To this end, local study groups have been suggested to ensure that small farmers learn from successful neighbouring milk producers or processors. ME 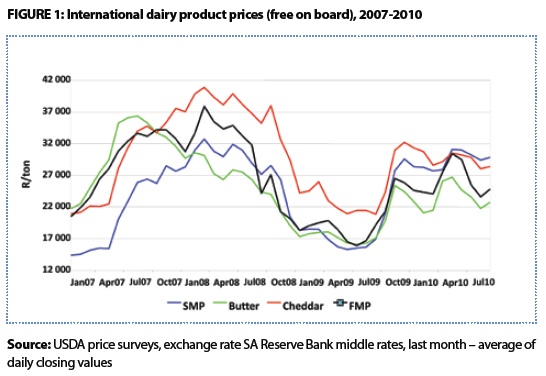 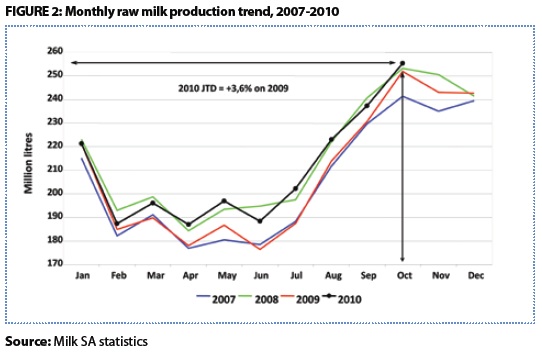